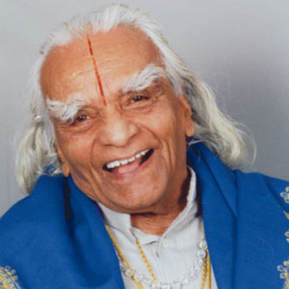 The name IYENGAR derives from Yogacharya BKS. IYENGAR, an international renowned Yoga Master. In 2004, he was named by Time Magazine as one of the hundred most influential people in the world. He is also the author of many Yoga books. The Master is universally recognized and honored for the depth of his understanding and the teaching of the art, science and philosophy of Yoga. He developed an innovative approach and devoted himself to the study of classical Yoga and medical sciences. Master IYENGAR is an inspiration.

He was born on December 14, 1918 in Bellur, India, after the First War World, when the country was suffering from the Influenza epidemic. His mother suffered from this epidemic in pregnancy, and in his childwood the Master was a victim of malaria, typhoid and tuberculosis.

At the age of 16 he began practicing yoga with his brother-in-law and Guru Sri. Krishnamacharya in Mysore, and at the age of 18 went to Pune to teach Yoga.

In order to improve his health, IYENGAR was a dedicated practitioner, referring in his book “Light on Life” that Yoga saved his life.

His practice helped him to explore and achieve perfection on asanas (postures). He was one of the first teachers to bring Yoga to the West and his method expanded worldwide.

In 1966 he wrote his first book “Light on Yoga”, still considered as a guid for yoga practice and in 1975 founded his school, Ramamani Iyengar Memorial Yoga Institute, in Pune.

During more than 70 years of teaching he developed an innovative Yoga method, which is taught under his name. He practiced and studied until his death following his art with dedication and beauty integrating body, mind and emotions.

This method is distinguished by precision, attention to anatomical details and posture alignment. It is a sequential practice, combining postures and intelligent chaining to achieve a certain goal.

Master IYENGAR invented props to use on the practice such as belts, bricks, chairs, ropes, bolsters, blankets with the aim not only to help students learn postures in a correct way avoiding the risk of injury or tension, but also to intensify the work of an asana. The materials can also be used to support the body, to give a sense of orientation, perception and deep knowledge of a posture. This way the student can also assimilate and integrate the asana benefits in a more conscious way.

The Master is also a pioneer in the therapeutic applications of Yoga for the treatment of many medical conditions and physical problems.

He died on August 20, 2014 at the age of 96 years old and left a legacy to thousands of teachers, including their children Geeta Iyengar and Prashant Iyengar and his granddaughter Abhijata. His daughter Geeta Iyengar died in December 2018, after the ceremony of the Master´s birth centenary celebrations.

Currently, the classes at Ramamani Iyengar Memorial Yoga Institute are conducted by his son Prashant Iyengar, his granddaughter Abhijata Iyengar and other senior teachers.

About an interview that Master gave to the Yoga Journal…

“According to you, what is Iyengar Yoga?

BKS Iyengar: I myself do not know [laughs]. People, for convenience’s sake, brand my practice as Iyengar Yoga. I just try to get the physical body in line with the mental body, the mental body with the intellectual body, and the intellectual body with the spiritual body, so they are balanced. Each asana has an optimum line or position. From the head to the foot, from the front to the back, from the right to the left—without deviation, without distortion. Beyond that, I don’t think I’ve done anything. It’s just pure traditional yoga, from our ancestors, from our gurus, from Patanjali.”